How To Handle Inappropriate Interview Questions

“Sell me this pen”

“If you were a brand, what would be your motto?”

or Elon Musk’s favourite question: “You are standing on the surface of the Earth. You walk one mile south, one mile west, and one mile north. You end up exactly where you started. Where are you?”**

We often hear and read about weird interview questions, so we thought we’d ask our social media followers to tell us the strangest questions that they’ve been asked at interview. We have to admit that we were surprised by their answers, and to be honest – quite disappointed.

What we thought might be some fun, perplexing questions, and we did get some: – for example, ‘if you could be any animal which one would you be?’ Actually it gave us an insight into a lack of experience or inclusivity amongst some interviewers as overwhelmingly it seems that that the strangest questions our followers had mainly been asked at interview stage were ageist/racist and/or sexist.

“Were you promoted based on your ethnic background?”

“Why aren’t you married?”

“How do you feel about reporting into a female manager?”

Apart from being against anti-discrimination law and bad for business – see here it seems that some decision makers in companies are still neglecting to see the positive impact that employing women, younger/older employees and having a staff with a diverse ethnic/religious background can make on a business and that recruiting people because they remind hiring managers of themselves is short sighted.

So, what do you do if you are asked a question that you are uncomfortable with at interview stage? 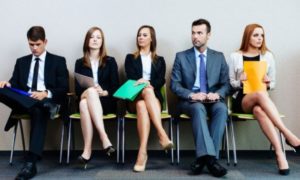 If it is just a ‘strange’ question – it is probably there to see how you manage under pressure – ‘if you had magical powers, what would they be?’ ‘if you could be any fruit, what would you be?’ there is no right or wrong answer, it’s being used as a tool for the interviewer to discover how you approach and a solve a problem. In this case, keep calm, keep in mind the role you’re applying for and try to give an answer that shows that you can take control and deliver the unexpected – for more tips see this blog

How to handle an inappropriate question

Sometimes inappropriate questions may be just the result of an inexperienced hiring manager who simply wants to build rapport and get to know you as a person, however, the issue is the implication that such questions are being used to make a decision about the candidate’s suitability and that is just unacceptable.

Remember, you have the right to challenge any questions you feel are inappropriate. Ask the interviewer why it’s relevant to the job?  Maybe they asked the question on the back of a general conversation. If you feel the interviewer’s intentions were just to build rapport and get to know you then you might let the first inappropriate question go. However, you need to be comfortable working at the company. If the questions you are being asked during the interview are indicative of the company’s policies, you may be better off finding out now.

Whether it’s to lose weight, be more healthy, more frugal, there are many resolutions being made at this time of year, however, if your resolution is to find a new job or make more hires, here are some resolutions we at Inspire Selection think can help you on your...

You’ve Just Been Made Redundant, Now What?

Being made redundant can be an emotional time – it is difficult not to take it personally even though the reasons for redundancy are more often to do with the organisation than the individual https://www.inspireselection.com/stigma-around-redundancy If you are unlucky...

Q&A Time: What Happens After I Send My CV?

Question: What happens after I send my CV? What is the usual process? Answer: Sometimes when applicants apply for a job, we know that it can feel a bit like they've been sent to the bottom of a pile like this! For each vacancy we advertise we receive on average...

You have found your perfect job, congratulations! However, now you must deal with the issue of RESIGNATION! It can be quite an unpredictable time and you may feel like you are letting your current employer down. This feeling of guilt can tempt you into giving your...

Ever wonder how Recruiters manage to screen through 2000 applicants on LinkedIn, and what we recruiters look for on a LinkedIn profile?  Recruiters filter people in or out depending on many things. Employers can reduce 2000 applicants to just 50 within a couple of...